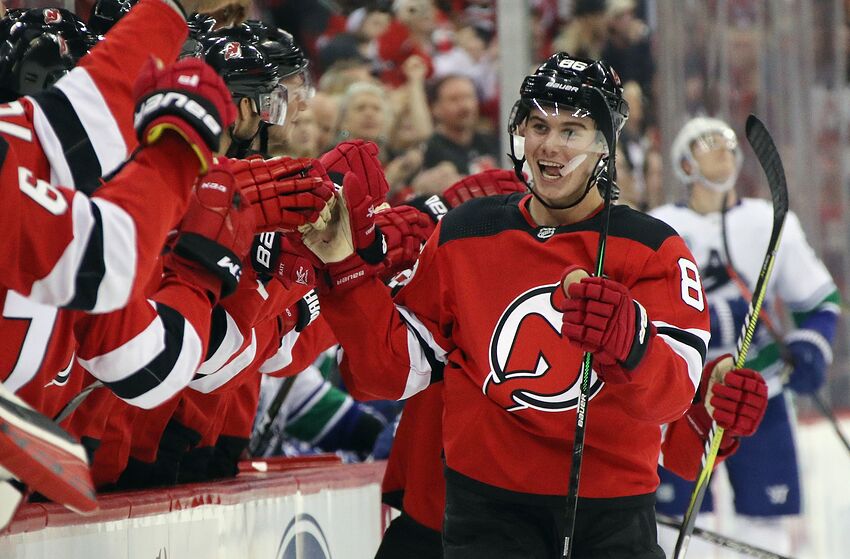 NEWARK, NEW JERSEY - OCTOBER 19: Jack Hughes #86 of the New Jersey Devils celebrates his first NHL goal as he scores at 14:08 of the first period on the power-play against the Vancouver Canucks at the Prudential Center on October 19, 2019 in Newark, New Jersey. (Photo by Bruce Bennett/Getty Images)

Once believed to be the organization’s cornerstone player, Taylor Hall’s days with the New Jersey Devils appear to be numbered. The seeming inevitability of Hall’s departure has stirred up many emotions, concerns and realizations fans are struggling to accept.

Evidently, moving Hall will probably set New Jersey’s rebuild back a step or two, and the team will lose another star-caliber player in their prime, something fans are long accustomed to seeing. While the return for Hall is expected to be bountiful, it will neither indemnify the team, nor provide assets capable of reciprocating his role and production rate, at least for this season.

Aside from losing their best player, the Devils will also part with the current face of their franchise. Yes, this will impact the roster’s infrastructure and organization’s league-wide relevance, however the team’s identity won’t follow Hall out the door. This is something Devils fans are probably struggling to cope with the most, especially after how long it took to regain this instrumental component of team culture after former icons like Zach Parise and Ilya Kovalchuk left.

While things may look bleak, Devils fans shouldn’t dread another stretch of years where the team struggles to regain an identity. The organization’s next one is already in place and will simply be reshaped around their cast of young up-and-comers.

When it comes to identity, the widespread belief is it focuses around a team’s best and brightest players, who are widely recognized across the hockey world that have or will be part of the team’s long-term future. While this is certainly true, a team’s identity additionally comprises of players that are part of their past and present. Even if/when Taylor Hall gets dealt, the New Jersey Devils still possess these major components.

Links to New Jersey’s past—longtime veterans—still remain on the team and will likely stick around beyond this season—Travis Zajac, Andy Greene and Damon Severson. Both are among the longest-tenured Devils players on the roster, predating the current Ray Shero era. Zajac and Greene were with the team when the Devils were regular playoff contenders and made their unexpected 2012 Stanley Cup Final run.

Neither of these players are star-caliber by any means and may not be with the organization for much longer, but their loyalty and tenured standing with the organization engraves them in the fabric of this team’s current and historical identity. While the casual hockey fan might not recognize their names, they’re acclaimed by the Devil’s faithful and experienced multiple eras in the organization’s storied history. In today’s NHL, it’s a growing rarity to see players spend the majority or entire careers with one team, which is something that currently holds true with Zajac, Greene and Severson.

Presently, the Devils have a promising young cast of assets in place to continue building around their cornerstone players, despite this year’s astronomical blunder. The likes of Blake Coleman, Pavel Zacha, Kyle Palmieri, Nikita Gusev, Jesper Bratt and Will Butcher have established themselves as integral pieces to whatever success the New Jersey Devils are capable of achieving. While it may not seem like it this year, the Devils have a diverse array of character players with a variety of skill sets littered throughout their roster that can and will click when the final pieces fall into place.

Look at rosters built by the New Jersey Devils or Detroit Red Wings teams from the mid-90s to late-00s or more recently, championship squads of the Pittsburgh Penguins and Chicago Blackhawks. These teams all maintained casts of supplementary players capable of fulfilling roles from top line pairings to depth assets that stepped up at times when their star players couldn’t. A team’s star players largely defines an organization’s golden era, but their secondary assets play a pivotal role in the success attained during those years that largely goes overlooked.

With Hall likely on his way out, the franchise faces will now be centered around New Jersey’s two young centers—Nico Hischier and Jack Hughes. These will be the names hockey fans will automatically associate when they hear about the New Jersey Devils moving forward.

Hischier just signed a seven-year, $50.75 million extension earlier this season, while Hughes is a rising hockey phenom that already has sweeping notoriety throughout the hockey world. Both players have shown flashes of their coveted skill sets and will produce the numbers New Jersey Devils fans have been hungrily anticipating in due time.

Next: Alain Nasreddine Hire A Sign Devils Season Is Over

Hischier is shaping into a versatile two-way forward with offensive prowess, who exhibited his star-caliber capabilities last season when he posted 47 points in his 69-game season in 2018-2019. This equates to 55-points over 82 games, most of which was achieved without Taylor Hall playing at his side. You can argue those numbers would have been higher if injuries didn’t derail his sophomore campaign.

Yes, Hughes’ play has been spotty, but he’s still acclimating to the NHL level of play. Hughes has had stretches where he looks really confident and comfortable on the ice, which is something he’ll continue to naturally build on through the duration of his rookie campaign. You can argue the team’s abysmal performance and first-year jitters are prolonging his development, which will be remedied when he grows physically and strategically as a player.

It’s been a rough seven years for New Jersey Devils fans, where the light at the end of the tunnel always seems to glisten as much as it fades. It will be a sad day if/when Taylor Hall is moved out of New Jersey and while the present is filled with dismay and uncertainty, it’s important to look at the big picture. It’s presently difficult to hear and accept, but the New Jersey Devils still have an identity in place, the assets to build around it and every opportunity to be successful in the future.